Gallery
Get a Quote

From Portugal to The Antarctica

Portugal to the extremities of Antarctica, it’s a Cork Pod

Known for its durability, insulation, sustainable and aesthetic qualities cork by Amorim Cork has found application in décor and design in all corners of the globe. In its latest creative application, Amorim Cork is now being used in an über-cool and innovative design called Skulpod, an igloo-style modular structure conceptualised and designed by South Africans Nouschka Očenášek and Ryan Ashworth.

Skulpod taps into the modular home trend, which uses a system of smaller parts to create a concrete structure sturdy enough to function as a house. Modular homes have surged in popularity due to a range of benefits which includes cost reduction and flexible design and augmentation – however, often the separate parts used in construction are heavy and cumbersome, making assembly impossible to do without machinery or a team of experts.

Nouschka and partner Ryan recognised a gap in the market: Ryan, trained in construction, was traveling extensively to Antarctica to set up ‘glamping camps’, where the unwieldy designs showed an apparent lack of sensitivity to the environmental and physical realities. It was difficult to erect in extreme climates, and both Ryan and Nouschka, who is a trained interior architect, thought that there had to be an easier way.

Using the same composite materials that yachts are made from, the pair played around with designs to create a shelter that would provide all the sturdy safety needed, but which would still be easy to transport and assemble. In addition, the shelter had to have sustainability at its core, with no damage to the environment during the manufacturing process, or permanent traces once disassembled. 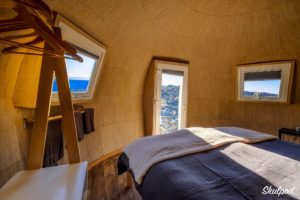 The result is Skulpod, a beautiful igloo-style modular home that is super lightweight and can be taken anywhere and assembled by two people in less than a day. Nouschka explains: “Skulp is the word for shell in Afrikaans. A pod is a hard-protective outer layer of a pea, nut or seed, or a detachable, self-contained unit. Inspired by the ‘skilpad’ (tortoise) that takes its home everywhere, Skulpod can also be boxed and shipped anywhere, and its lightweight design means that it can be assembled in isolated places that can only be reached on foot.”

Nouschka says that everything had to work in perfect unison to create the perfect modular home. Apart from being light and impermeable, internal wall coverings had to provide thermal and acoustic insulation, provide a barrier against fire, be durable and be aesthetically pleasing. The designers considered various materials to find the best, and after intensive research and validations, “easily” decided that cork would be the best. “It naturally has all the components that we needed for Skulpod. It is a sustainable, durable material, and by using cork we also contribute to the environment. Cork is naturally beautiful, so it doesn’t need paint laced with chemicals. Offcuts are recycled to ensure nothing is wasted. We also liked the idea that no cork trees are ever ‘felled’, but just stripped of the outer layer of bark every few years. The cork forests also retain greenhouse gasses, so in a way, we are contributing to nature, instead of taking away,” explains Nouschka.

So effective is this structure, that a Skulpod shelter has been erected in Antarctica, where it comfortability withstands extreme climates.
Noushcka closes: “Skulpod personifies our approach to the world: people should be challenged to minimise their space, to live with less, to tread lightly and to live closer to nature.”

An objective Amorim Cork is proud to be associated with.